Delegates at the opening of ITL World’s first UK office

ITL World, regularly rated as the fifth most powerful travel management company in the Middle East, has officially opened its first office in the UK.

The new office in Ilford, Essex, is the Dubai-based company’s first outside of the Middle East and Asia, and its official opening was attended by Virendra Sharma, member of UK Parliament; H.E. Sheikh Abdulaziz bin Abdullah bin Zahir Al Hinai, the Omani Ambassador to the UK; Abdulaziz Al- Babtain, Managing Director and CEO of The National Agricultural Development Company (NADEC); Ms Manju Shahul-Hameed, the former Mayor of Croydon and other senior delegation members from the UK and Middle East.

After the official inauguration and ribbon cutting ceremony, ITL World invited exclusive guests and members of the media to an informative press conference followed by a cake cutting, dinner and drinks reception. 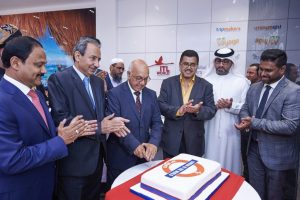 Dr Siddeek Ahmed, chairman and managing director of Eram Group, the parent company of ITL World, said: “Over the last few years, ITL World has established itself as a leader in travel management across Asia and the Middle East and as a trusted travel advisor to our clients across various industries.

“We always envisaged to commence operations in the UK, and we are very excited that we finally have the opportunity to offer Londoners our portfolio of travel services.”

The rapidly expanding company aims to tap into the flourishing outbound tourism market from the UK, which is estimated at approximately 65 million trips every year. ITL World will also focus on tapping into the inbound market, which is estimated at an annual 24 million trips into the UK. With a rich presence across Asia and the Middle East, ITL World’s UK office will further aid in the merging of businesses within its global network.