Low-cost airlines and middle class travellers are playing a key role in changing the face of the hotel industry in Dubai and the Middle East, according to a leading industry executive.

Laurent A. Voivenel, senior vice president, Operations and Development for the Middle East, Africa and India at Swiss-Belhotel International, told industry expo The Hotel Show that technology was another key factor reshaping the region’s hospitality industry.

Speaking at the Middle East Hospitality Leadership Forum held during the event at Dubai World Trade Centre, Voivenel participated in a panel discussion on the booming mid-market in Dubai and its ongoing effect on four- and five-star operators.

Elaborating on some of the factors affecting the market, Voivenel said: “The hotel industry in the region is being reshaped by digital and technological advancements, new market players particularly regional independent operators, changing consumer behaviour, online distribution battle, over supply of rooms and emergence of new forms of competition such as AirBnB.

“We are increasingly witnessing a shift in key source markets to lower spending regions due to growth in low-cost carriers and expanding middle class, and this necessitates the development of more mid-market hotels.”

Dubai recently broke through the 100,000 rooms threshold and current has an inventory of 104,138 keys spread across 679 hotels. But only 38 per cent fall within the one to three-star classification, with the remaining 62 per cent representing four-star, five-star or hotel apartments.

By 2020, Dubai’s goal is to reach 20 million visitors and 160,000 rooms. Voivenel said: “Nearly 30 per cent of hotels will be in the mid-market category in the upcoming supply but it will still be less than the demand. 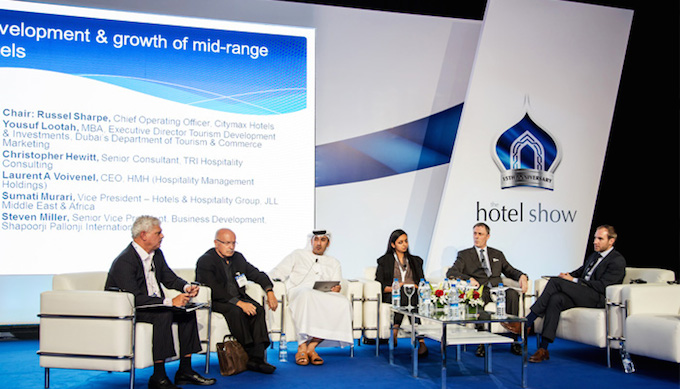 Laurent A. Voivenel (second from right) takes part in a panel discussion on the booming mid-market in Dubai

“To reach the goal of 20 million visitors by 2020, the city needs to achieve an annual visitor growth of seven to eight per cent and this can only be achieved by targeting a wider range of visitors and mass tourism markets.”

Voivenel added: “The hotel supply pyramid is no doubt upside down. There is huge percentage of luxury offerings at the top and relatively weak mid-market supply at the bottom. Over supply of rooms in the luxury segment is putting a tremendous pressure on rates that in turn is affecting ROI.”

Speaking about the rate war, Voivenel said: “Market distortion is dictated by the volumes which impact the average rate. If the volume of business is to grow at the pace of supply of key inventory then the market distortion will be minimum.

“Unfortunately the supply is growing faster than the demand which is putting pressure on the market. Operators and owners, therefore, need to tune down expectations. This could mean getting used to lower occupancies of 70 per cent as an average rather than 80 per cent which was normal until recently.

“Dubai’s tourism fundamentals are extremely strong and its vision incomparable. The solid foundation that the government has put in place through broadening portfolio of leisure and business attractions and facilities, diversification of source markets, collaboration between various business sectors will continue to boost and sustain demand.”