Top executives from Wyndham Hotel Group (WHG) have heard how the group is leading the way by implementing a growth strategy that focuses on being a ‘first-mover’ in new markets.

More than 6,000 delegates heard a variety of presentations, with one of the key messages being how significant elements of the company’s growth can be linked to the strategy of being leaders and “first-movers” in new and sometimes secondary and tertiary markets.

During a panel and press briefing, Dimitris Manikis, Wyndham’s recently-appointed president and managing director of Europe, the Middle East, Eurasia and Africa, said: “As people follow the planes, we follow the construction companies, we follow governments … local institutions, funds and investment bodies.”

Manikis said WHG would become the biggest hotel group in countries such as Kazakhstan, Uzbekistan and Georgia in the next two to three years.

“Why? Because it’s happening – it’s as simple as that,” he said. “You cannot afford not to be at the place where things are happening. You are either at the table, or you are on the menu.”

Barry Robinson, Wyndham’s president and managing director for Southeast Asia and the Pacific Rim regions, said events also drove demand in a market, and explained how WHG had become a first-mover, citing the example of Vietnam, where the company has an expansive presence “and the market is coming”.

Leo Liu, Wyndham’s president and managing director of the Greater China region, said there were a number of advantages to being a first-mover.

“People are always talking about going to secondary and tertiary cities,” he said. “It’s not started by default. It’s not that we don’t have a larger choice. I like the word ‘first-mover’ because to keep or to become the leader you’ve got to be the first … and in fact (in a lot of these secondary and tertiary Chinese markets), we are the first-mover among international operators.

“We follow not only the flag, but also the market trends, where people have their needs, so we can position ourselves as a challenger and a game-changer,” he added. “We like to bring life back to our hotels. That is the power of our brands.” 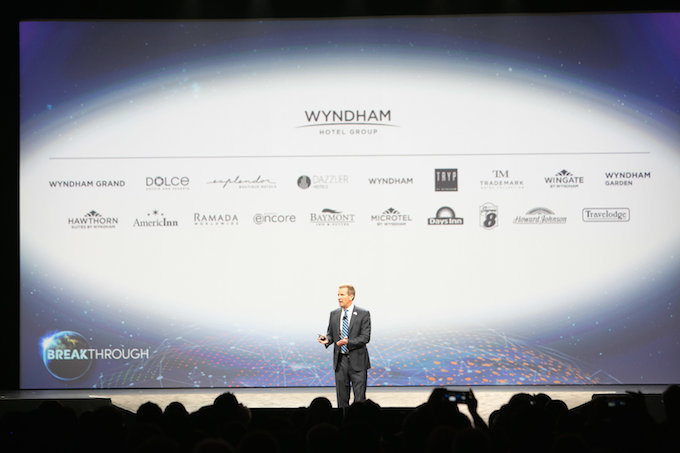 Wyndham has great expectations for the Chinese market. The company already has more than 1,000 properties in the country, but with plans for many more, according to WHG chief executive Geoff Ballotti.

“In China one of the best decisions we ever made was to close down our Hong Kong office and grow mainland China – out of Shanghai,” he explained.

“We had an Asia Pacific region, based in Hong Kong, and we now focus it out of Greater China, led by Leo Liu. We have 80 people there now, on a number of sectors. We have become a real force in China in a very short period of time.”

Alejandro Moreno, president and managing director for Latin America and the Caribbean, said Wyndham’s success in new markets in his region, which spans 40 countries, was helped by the variety of WHG brands operating in those markets.

He reported that Argentina’s first Days Inn opened recently, and a Wyndham Garden will follow shortly. WHG will also be introducing a number of brands to Brazil.

“We’re looking at what makes sense to the region,” he explained. “We’re looking to find the most suitable brand for the markets.”