Iran is proving to be an increasingly popular destination with air travellers, experiencing growing passenger numbers from around the world – a trend that looks like continuing during 2017. 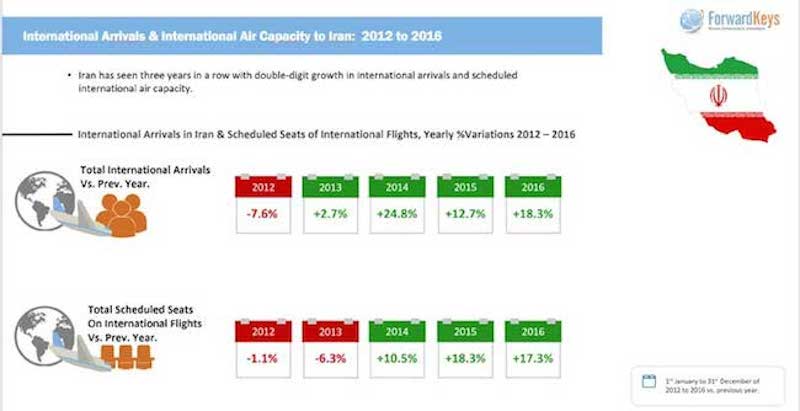 The study is timely, with the inaugural Iran Hotel & Tourism Investment Conference (IHTIC) due to take place on 7-8 February 2017 in Tehran, and set to be attended by a range of international investors and hotel industry experts.

ForwardKeys, which monitors future travel patterns by analysing 16 million flight reservation transactions each day, also found that international arrivals to Iran saw positive monthly growth throughout 2016, with the exception of June because of the timing of Ramadan.

The main source regions for air travel to Iran are North America, Europe and the Middle East. Together, they made up 83.7% of international arrivals during 2016. Germany, with a 14.3% market share, was up 8.3%, followed by the USA (10.7% share) up 9.3%. Bahrain, Canada and the UK, all with significant market shares, also showed healthy growth in visitors to Iran.

Among the 12 top origin countries, only China and Pakistan were outside these main regions. ForwardKeys’ data also shows that 40% of Chinese visitors to Iran last year were on business trips. 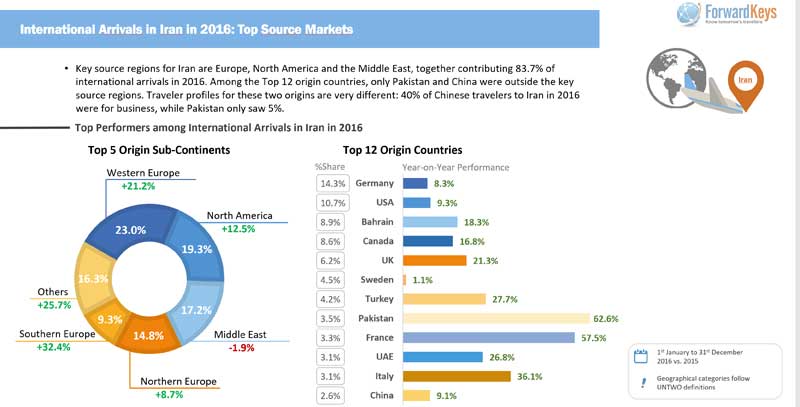 Looking ahead, forward bookings (ie: bookings already made for future travel) for the first half of 2017 are ahead 14.8%, based on those issued at the beginning of January, suggesting the upward surge of international visitors to Iran is still growing in momentum.

Arrivals in Iran during 2017 are being boosted by increased air connectivity from a number of centres:

Olivier Jager, CEO of ForwardKeys, said: “Our findings support the conclusion that political change in Iran is making the country more approachable – an attractive place to visit and potentially do business.

“The image of Iran around the world is changing. Its many tourist attractions, historic, religious and spectacular, are once again being emphasised. I expect visitor numbers to increase, so long as Iran’s airport capacity can keep pace.”