Mark Wang, president and CEO of Hilton Grand Vacations, said: “New York City has long been a top travel destination for our owners and guests.

“As current and potential owners reiterate the importance of vacation ownership opportunities in the Big Apple, we are thrilled to provide them with a premier new property that is ideally positioned near some of the best attractions the city has to offer. We are confident that this expansion will drive our Net Owner Growth by fulfilling the desires of current and future owners.”

The Central at 5th is situated on East 48th Street mid-block between Fifth Avenue and Madison Avenue, and located just steps from the world-class shops of Fifth Avenue and renowned attractions like Rockefeller Center, Radio City Music Hall and the Theater District. Resort amenities are expected to include a fitness center, outdoor terrace and private owners’ lounge. 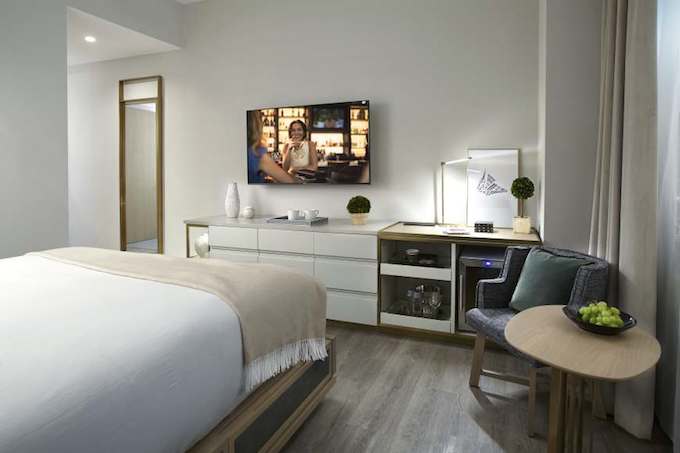 Bedroom at The Central at 5th by Hilton Club

HGV will acquire the property in two phases consisting of a total of 161 studio and one-bedroom units. The resort is anticipated to open in spring of 2020. Sales began in March 2019.

Abie Hidary, Hidrock’s CEO, said: “Hidrock is proud to continue developing first class projects in New York City, and we are extremely excited to be adding this exceptional property to the Hilton Grand Vacations portfolio.”

Joseph Ginex, the company’s chief development officer, added: “The collaborative effort with HGV has allowed our design team to create a unique facade and interiors, which will make this property one of the premier timeshares in Manhattan.”

HGV’s commitment to enhance its urban portfolio in New York City has led the company to develop several product offerings in the market. Last year, it opened The Residences by Hilton Club and acquired The Quin Central Park by Hilton Club – a well-known luxury lifestyle hotel in Midtown Manhattan that will be converted into 213 studios and one- and two-bedroom timeshare units.