Low-cost airline WOW air has added London Stansted Airport as the latest departure point for travellers to access affordable travel to the USA.

In April the airline launched a new long haul route to the US city of Detroit from London Stansted Airport via the Icelandic capital Reykjavik.

The inaugural flight took off at the end of April, using a brand new A321ceo with the tail number TF-DOG, named after man’s best friend, and following the airline’s tradition of naming its aircraft after family members.

With fares to Iceland starting from £29.99 and North America from £129.99, travellers can now make the most of the airline’s destinations, which also include Reykjavik, Boston, Chicago, LA, New York, Washington DC, Montreal and Toronto.

Joining London Gatwick and Edinburgh as the airline’s third UK departure point, London Stansted will also provide connections with the budget carrier’s new US routes to Cleveland, Cincinnati, Dallas and St Louis, all of which launch this month. 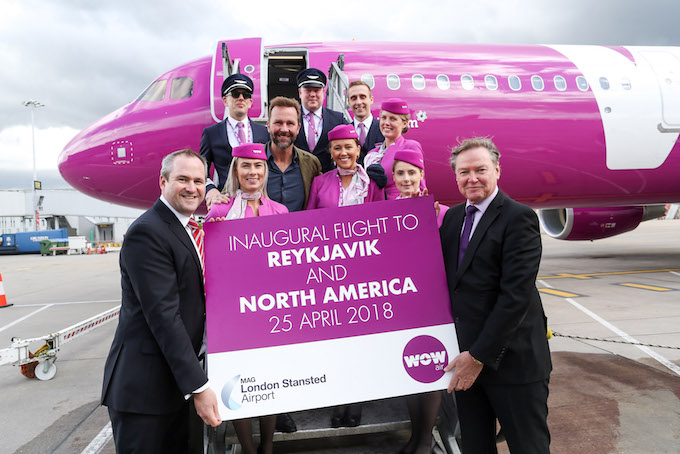 The launch of the new service to Detroit

Skúli Mogensen, founder and CEO of WOW air, said: “[The Detroit] launch well and truly highlighted London Stansted Airport as a key gateway from the UK to the US.

“This move is undoubtedly a reflection of our continued growth in Britain and our mission to offer greater travel possibilities on either side of the Atlantic.

“We’re delighted to be opening up a whole host of US travel destinations to UK travellers in Stansted and the surrounding regions the airport services.”

Martin Jones, London Stansted’s commercial director, added: “We’re delighted to welcome WOW air and its passengers to London Stansted for the airline’s first flight to Reykjavik that also opens up a fantastic range of exciting onward connections to the USA from its Icelandic hub, including Chicago, Los Angeles and its new service to Detroit.

“We wish WOW air every success with these great value and convenient flights which will I’m sure prove to be really popular with passengers from London and East of England as well those from the USA wishing to visit the UK.”

For more information or to book a flight visit www.wowair.co.uk