Virgin Atlantic has become the first airline in Europe to offer WiFi across its entire fleet – enabling its customers to remain connected across flights to and from the US, Caribbean, Africa, Asia and the Middle East.

Millions of customers travelling with Virgin Atlantic can now email, browse and socialise at 35,000ft from £2.99 as the airline completes its ambitious WiFi programme – at least a year ahead of other European long-haul carriers.

Using a combination of Panasonic and Gogo technology, WiFi is now available across the fleet of 39 aircraft and connectivity is available above 10,000ft so customers will be able to connect shortly after take-off, and remain online until shortly before landing.

Results so far have shown that 42 per cent of customers opt for the WiFi max package that lasts the entire flight, with the most popular routes for WiFi use being London Heathrow to New York (JFK), San Francisco and Atlanta. 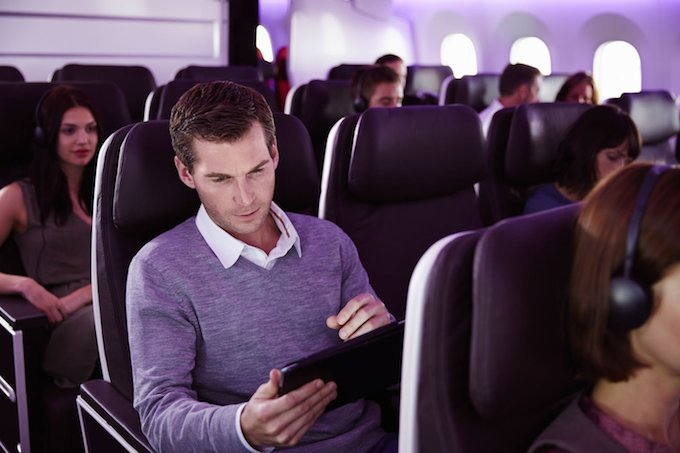 Connecting to WiFi on a Virgin Atlantic Dreamliner

Mark Anderson, executive vice president, customer at Virgin Atlantic, said: “From today customers flying around the world with Virgin Atlantic can work and play throughout their flight as we become the first airline in Europe to offer a fully WiFi enabled fleet.

“Innovation has always been in our blood and we’ve worked closely with WiFi providers to develop the fastest, most reliable connection across the Atlantic, and are the first carrier to offer WiFi between the UK and the Caribbean, China and Africa.”

Although WiFi has been commonplace on domestic carriers it has been a challenge for the industry to find reliable connections over vast expanses of ocean – such as the Atlantic. Unlike flying over Europe or the US the signal cannot come from the ground, and instead has to be transmitted to aircraft from satellites.

The airline is using a combination of two WiFi providers across the network –passengers travelling on the 787 will use WiFi from Panasonic, while A330s, 747s, A340-600s are powered by Gogo technology.