The Tenerife Tourism Corporation has announced the launch of its #bigwarmhug campaign to let British residents know the people of Tenerife are on their side regardless of what happens regarding the UK’s status in the EU.

Reaching out to both consumers and the travel trade, the campaign will primarily be promoted via social media channels, with the local people of Tenerife offering a “big warm hug” to British tourists already on the island, as well as encouraging British residents to engage in the good feeling campaign.

The Tenerife people, including island locals, personalities, taxi drivers, hoteliers and associated companies will upload images of themselves hugging British tourists holidaying on the island on to their own social media channels to demonstrate their love for their most important source market.

In a similar way, consumers in the UK will be encouraged to visit Tenerife’s website to download and print the Tenerife #bigwarmhug logo and take a photo of themselves hugging a person with the print in their hands. If they then upload the image onto their own social media channels, using #bigwarmhug and tagging Tenerife’s social media channels, those giving the best hugs will have their photos uploaded by the Tenerife Tourism Corporation. 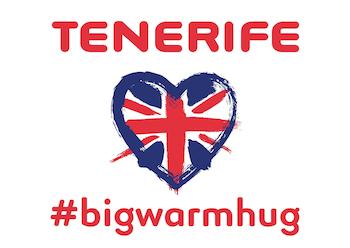 Tenerife is a major market for UK holidaymakers and timeshare owners, with the island’s connections extending back over centuries. The Tenerife Tourism Corporation believes the latest campaign will demonstrate to the people of the UK just how important they are to the people of Tenerife.

Vicente Dorta, director general of the Tenerife Tourism Corporation, said: “We are delighted to be running this campaign. The UK accounts for 34 per cent of tourist arrivals to our island and we are very grateful to the British public.

“We wanted to run this campaign to tell the British people that we are thinking of them during this uncertain time and that no matter what happens, they are never out of our hearts.”

The #bigwarmhug campaign also has the backing of the Tenerife Island Government, with the President himself extending a warm hug to British holidaymakers on the island.

Alberto Bernabe, Tourism Minister for the Tenerife Island Government, said: “The key to this campaign is to engage with as many people as possible – both on Tenerife and in the UK. With so many turbulent times in the world and political uncertainty in the UK at the moment, we hope this campaign will show the British people that we are with them no matter what.”

In 2015, Tenerife welcomed over 1.7 million British visitors to the island, and latest figures for 2016 show that between January and May this year there were over 800,000 British visitors, representing a staggering 21 per cent increase on the already impressive figures of 2015.