RDO7: Hazeldine – How to raise your sales game

“Nothing happens until somebody sells something – selling makes the world go round” – that was the message from Simon Hazeldine to delegates at the RDO7 timeshare conference. 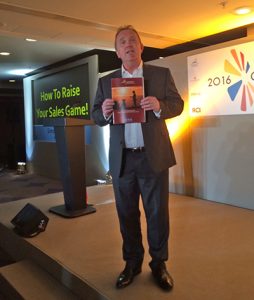 Performance consultant, best-selling author and professional speaker Hazeldine delivered a fast-paced, insightful presentation on how to sell to the different personality profiles we have today, using neuro-science to demonstrate how the human brain reacts to sales.

“There are five key principles for an exceptional sales performance”, he said.

“The first is to get real. Sometimes what people do in business is stick their heads in the sand. Take social media for example – when we don’t understand it we try to ignore it.”

Hazeldine explained that often in business when people have a vast amount of responsibility, if things go wrong others will be blamed. It’s time to take responsibility and think ‘in the real world’ he explained. If things do go wrong, it’s likely to be because we have recruited the wrong person, the management structure is wrong or we haven’t provided enough training.

Get a strong mind set, skill set and tool set. The winners’ triangle is made up of 30% skills, 50% attitude and 20% knowledge. Spending time enhancing skills will increase confidence for a positive attitude. How you are feeling affects performance and your performance affects results.

According to psychologists, speaking in front of a large group of people is one of the most common human fears. Hazeldine used the comparison that most people would rather be in the coffin than giving the speech at the altar. “We should take note from Amy Cuddy’s TED talk – fake it until you make it,” he said.

Hazeldine shared findings of a scientific experiment renowned in the psychology field. People were given blood tests to see which hormones were released when the candidates had different postures. Candidates first sat on a chair in a slouched, crumpled up position, before standing up and maintaining a strong, good posture. Once the candidates had stood up high levels of testosterone were released, making them immediately feel more powerful and in control. Hazeldine compared this to strong sales professionals. “You won’t see any of us sitting in a lobby before meeting a client – we’ll be stood ready and waiting,” he said.

“There is no reason anyone would want a computer in their home.” – Ken Olson, 1977

Ken Olson was a probability thinker, basing his assumptions on evidence. Hazeldine then explained that his own brother was a possibility thinker, taking things that most people thought to be impossible and turning them into a reality, such as walking on fire or walking over broken glass.

We have to be the possibility thinkers and believe that we can cross fire and glass, said Hazeldine. The sales technique based on Edward Strong’s theory in his 1922 book is no longer relevant. Hazeldine shared insight into the personality types we face in the modern sales game, namely: amiable (yellow), expressive (green), driver (red), and analytical (blue). Unless we are targeting our sales effectively we are missing out. We need to observe, classify and adapt to whichever personality group our client belongs before launching into sales mode. 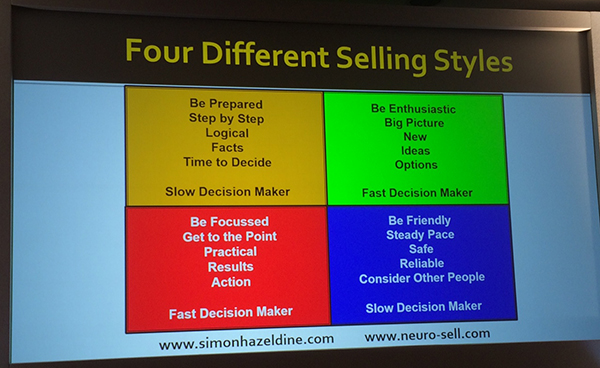 Use the 80/20 principle. On average, you will profit from 20 customers out of 100, we need to remember this and keep focused on the end goal.

In order to achieve great things we need to be team players. Hazeldine used the example of Roger Bannister, who ran the first sub four minute mile on 6 May 1954. The feat was not only achieved by Roger, but also by his team mates Chris Chataway and Chris Basher, who provided the pacing and helped him to cross the line in 3 minutes and 59.4 seconds.

In closing, Hazeldine added: “You become the people you spend the most time with. And if you lay down with dogs, you will get fleas!”