Entrepreneur and professional poker player Caspar Berry enthralled delegates at the RDO7 conference with a compelling presentation on risk taking and decision making – in poker, business and life. 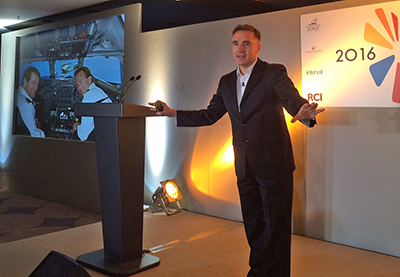 As a 25-year-old Cambridge graduate who moved to Las Vegas to become a professional poker player, Berry knows more than most about the business of risk – and the taking of risks in business. In 2002 he co-founded Twenty First Century Media and built it into a successful audio-visual media company before selling it in 2008 to Bob Geldof’s media giant, Ten Alps.

Referencing the environment of uncertainty we all live in, Berry urged delegates to embrace it. “Uncertainty can be whittled down to one word – risk. We take risks every day – currency fluctuations, financial markets – risk is all around us whether we like it or not,” he said.

Sharing what three years making a living from professional poker taught him, Berry explained that the key was to think ‘macro’. “You bring someone into your organisation that you have only known for three hours,” he said. “More people are killed on stairs than are killed by ISIS. Sports – horse riding, skiing – they all carry an element of risk. Poker is more like life than we’d like to think.”

Berry pointed out that in trying to manage risk, you have to try to create certainties. He said: “A commodity of the 21st century is data. It can be used to produce probabilities which augment our decisions.”

In 1984, Philip Tetlock of the National Research Council conducted a study on the ability to predict the future. He took a set of questions about economies and world events, and asked 284 world experts to answer them. He also selected a series of random results.

Twenty years later he looked at what had happened and matched the outcomes against the experts’ predictions only to find that although some experts came closer than others to being accurate, the strongest correlation was negative! The experts were no closer to a correct assessment of the outcomes than the random answers had been.

Using this study to validate his argument, Berry said: “Everything that had to happen, happened. We think our decisions shape our world – they don’t. Life is random and often controlled by forces outside your control. There are millions and billions of agents of change and chaos.” 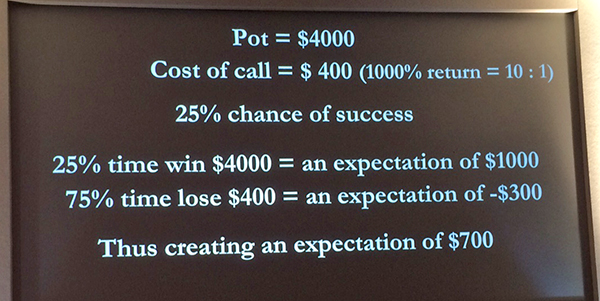 So, in a world so unpredictable and uncertain, how does Berry suggest we proceed in business?

“Stop sweeping risk under the carpet,” he said. “Embrace it. Judgement and expertise will help us to navigate the maze. And calculation, which underpins capitalism.” At which point he shared his Calculation of Risk, the sum of which was, that out of a $400 stake in poker, Berry would likely get $700 in winnings. “That’s a 175% return – it’s a great call!”

Putting the Risk Calculation into words, he said: “More of us should be prepared to lose; be prepared to pay to gain. Stop looking for the right answer every time.”

A great leader, he said, is optimistic, positive and consistent. A great leader must also be prepared to take risks. “I have been lied to and screwed over more than most,” he told delegates. And referencing his Calculation of Risk, he added: “If 20 per cent of those you meet will lie to you, then you know you have to get more out of the [other] 80 per cent.”

Leaving his best advice to the close, he concluded: “Push through profound setbacks. Trust your judgment.”