British travellers are creatures of habit, with almost half admitting they always go through the same rituals to ensure their journey and holiday goes to plan.

The new survey conducted for British Airways also found that fliers also follow the same routines when it comes to the time they arrive at the airport, the food and drink they consume and even going to the toilet before boarding.

It also emerged that 72 per cent of Brits believe they are an organised traveller, while 20 per cent admit that although they usually get everywhere on time, and with everything they need, it is a little haphazard.

Carolina Martinoli, director of brand and customer experience at British Airways, which commissioned the research to mark its multi-million pound investment in its World Traveller catering, said: “Travelling by its very nature requires people to relinquish an element of personal control. 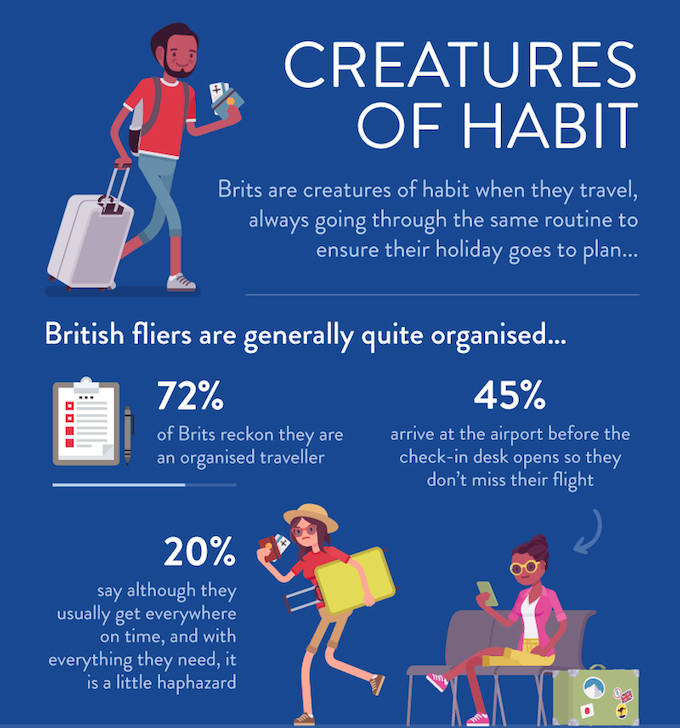 “So we know it helps people to have routines in place to manage that, be that one person being in charge of the passports, getting to the airport early or being ready at the gate as soon as the flight is called.

“These habits are an important part of the holiday ritual and they don’t stop at the airport – in-flight habits such as keeping a phone and money in a pocket or choosing what to eat on-board are all part of it too.

“This is why our investment in our long-haul catering is proving so popular. It caters to all those needs, from the travellers who want to try new food to those who like to squirrel snacks away for later.”

The study, of 2,000 Brits, found 45 per cent leave plenty of time to check-in for their flight – getting to the airport after the desk has opened but with time to spare. An organised 45 per cent will arrive at the airport before check-in has even opened.

After heading through security, one in six Brits will always enjoy a ‘pre-holiday drink’ in the bar – regardless of the time, while another 24 per cent will sup an alcoholic beverage if it’s an appropriate time of day. 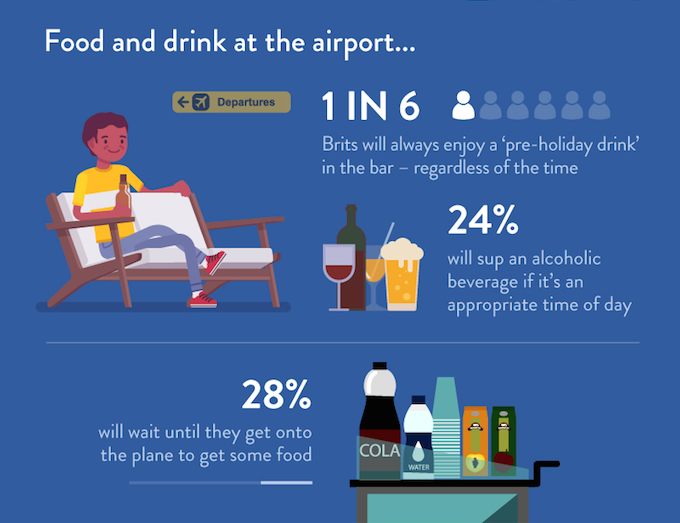 When it comes to eating and drinking, travellers also have their own habits, with 28 per cent of people seeing flying as an ideal opportunity to indulge in food and drink.

Thirty-five per cent will tuck into meals, snacks and beverages as soon as it is served on board so they have finished everything when the flight attendant comes around to collect the rubbish, while almost half will hold on to at least some of it to have later in the flight.

But 36 per cent admit they often consume food and drink in the air that they wouldn’t usually have on the ground.

More than a third are more likely to eat pretzels while flying and 28 per cent eat more nuts on a plane than they do on the ground.

Sweets, chocolate and cheese and biscuits are also among the foods people are more likely to eat in the air.

Researchers also found many travellers follow a set routine when boarding the plane with 52 per cent always going to the toilet beforehand, even if they don’t need to.

Half of British fliers will head to the gate as soon as it is announced, while 40 per cent will hold back to miss the rush, without leaving it until the last minute. 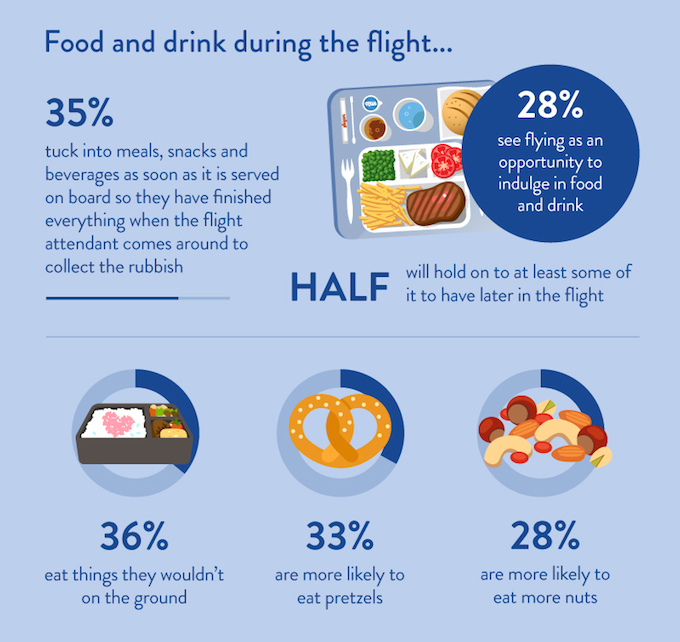 A daring one in 20 admit they won’t make a move to the gate until the ‘final call’ message is flashing up on screens.

It also emerged that despite having the overhead lockers, 59 per cent of Brits will keep their passports on them during the flight while 67 per cent will keep hold of their money.

Others will also leave their phone, tablet and food and drink in the seat pocket rather than storing it overhead.

And while four in ten will look after their own travel documents, 35 per cent of Brits say they are often put in charge of keeping hold the of the passports and tickets for everyone they are travelling with.

But the study also found that travellers from France are among the least likely to have the same rituals on holiday, with just 29 per cent sticking to the same routine when they go away.

German, Swedish and Israel fliers are also less likely to stick with the same habits.

In comparison, 69 per cent of Chinese people and 64 per cent of Indians admit they generally so the same thing.

However, Brits were found to be most consistent with their food choices in the air and on the ground, with just 36 per cent saying they often eat snacks and meals in the air that they wouldn’t usually have on the ground. 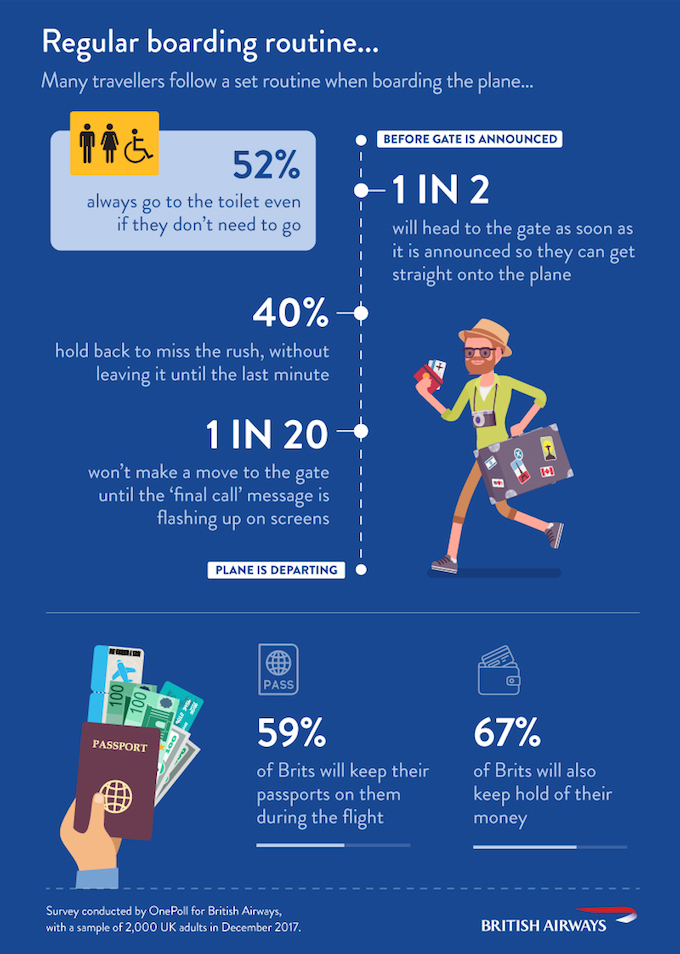 But more than seven in 10 Indians admit their diets differ when they are on a plane.

Meanwhile, while travellers in Norway are most likely to consider themselves organised (87 per cent), those from Hong Kong are at the other end of the scale with just 60 per cent believing they are on top of everything when they travel.

Carolina Martinoli added: “We’re delighted with the response we’ve had to the new catering. We’ve focused on introducing more quantity and quality.

“A four-course main meal has been developed by our team of chefs to be full of flavour at 35,000ft and we’ve created regional options depending on the route.

“The second meal option is either a tasty sandwich or a more substantial pizza wrap, both served with additional snacks, depending on the length of the flight.”

To find out what kind of traveller you are, take the quiz.