The Loro Parque Foundation has decided how to distribute the $1m that it dedicates each year to nature conservation projects carried out in the five continents.

The decision was made at the annual meeting of its Advisory Committee, which took place in Puerto de La Cruz, the city where both the non-profit organisation and its main sponsor, the popular Tenerife attraction Loro Parque, are based.

Threatened species and ecosystems on the American continent will receive almost 60 per cent of the funds ($577,000), followed by projects focusing on European nature, which will receive just over $203,000, and African projects, which total $126,000.

Asia, with $73,000, and Australia-Oceania, with $21,000, close the funding, which reaches the five continents and will be distributed among 40 conservation and research projects to be implemented by 34 NGOs and universities around the world.

By country, Colombia stands out, as it will receive almost $145,000, followed by the Philippines, Brazil and Bolivia, which will receive just over $60,000 each. However, the list of states is much longer, and this year the Foundation will also carry out projects in Mexico, Ecuador, Nicaragua, Guatemala, Cuba, Belize, Costa Rica, Zimbabwe, Ethiopia, Cape Verde, Madeira, New Zealand and Polynesia. In addition, some of these projects are trans-national, so their benefits will reach the ecosystems and endangered species of many other bordering countries. 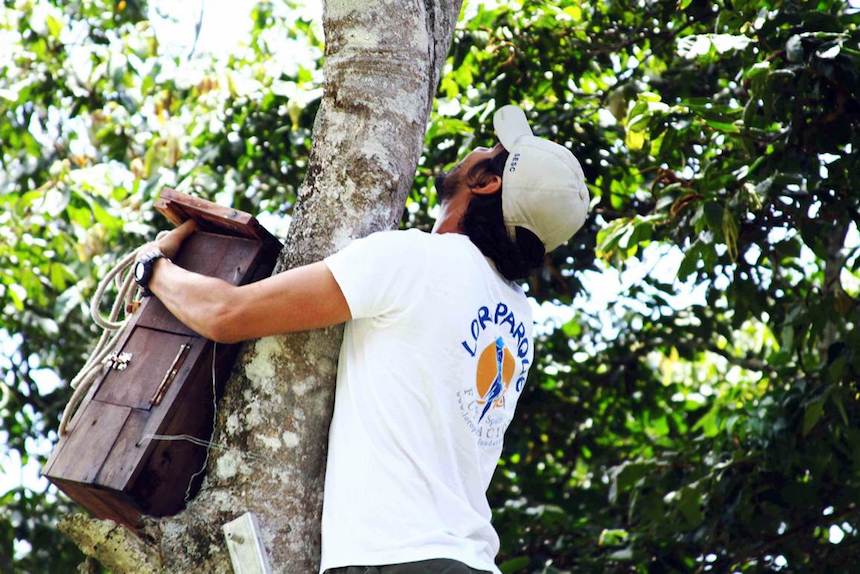 From an ecological point of view, terrestrial species and ecosystems are the ones that will receive the most help from the Loro Parque Foundation ($800,000). Among them is the Philippine cockatoo – on the red list of the International Union for the Conservation of Nature (IUCN) as critically endangered – whose project will receive $68,000 to continue securing the populations on the island of Rasa and try to extend the reproductive success achieved in that area to other places in the region.

Other major projects on terrestrial species and ecosystems are aimed at protecting lions in Zimbabwe’s Hwange National Park, the Great Green Macaw and the Lilacine Amazon in Ecuador, or the Blue-throated Macaw in Bolivia – all of which will receive funding in excess of $60,000 in 2019.

Also of great importance is the effort in the conservation of marine species and ecosystems, to which the Loro Parque Foundation will dedicate $200,000 next year. Of these, almost three-quarters will be allocated to cetaceans (orcas, dolphins, humpback whales and pilot whales), through different research projects for their welfare, the monitoring and conservation of the orca population of the Straits of Gibraltar, or the development of systems to prevent the accidental stranding of pilot whales.

The Foundation will also participate in a project on the island of Madeira for the conservation of the Mediterranean Monk Seal, a species listed as critically endangered on the IUCN Red List – making it Europe’s most endangered marine mammal. In addition to the marine mammal projects, the Foundation will also continue conservation work on other species, such as sea turtles and sharks, during 2019.