Cork Airport has welcomed the announcement that Ryanair has added four new services to its Winter 2019 schedule.

The airline’s passenger numbers at Cork Airport are also forecast to increase by 17 per cent in 2019, its largest increase among all Irish international airports.

The airline has extended its summer services to Alicante, Budapest, Malta and Poznan, twice-weekly for the forthcoming winter season.

An estimated 1.2 million Ryanair customers will pass through Cork Airport this year, an increase of 17%.

Cork Airport is entering its fourth year of consecutive growth, with passenger numbers set to rise by eight per cent this year. It is forecasted that 2.6 million will travel through Cork Airport in 2019. 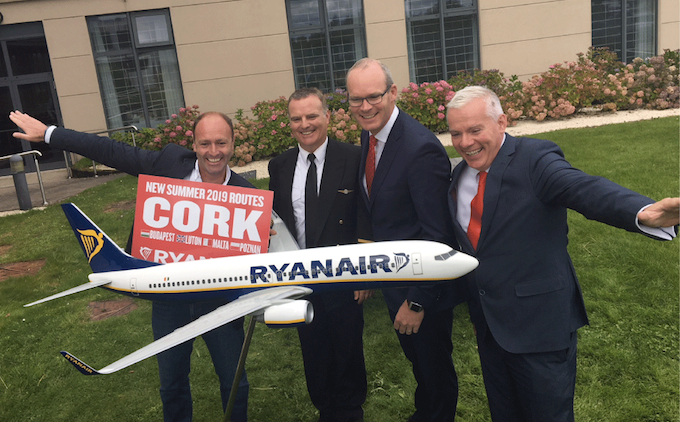 Niall MacCarthy, managing director at Cork Airport said: “We are delighted with today’s announcement from Ryanair and in particular its commitment to extend its new Summer 2019 routes of Budapest, Malta and Poznan for the winter season.

“The extension of services to these destinations means that our customers across the south of Ireland will have even greater choice this coming winter, whether that is for a winter sun getaway, or a European city break.

“It will also benefit the region as a whole, with inbound visitor potential to key attractions such as the Wild Atlantic Way and Ireland’s Ancient East. Our business development team continues to work with Ryanair, and our other partner airlines, on further positive announcements, ensuring the continued growth of Cork Airport.”

Over 50 routes are now on offer from Cork Airport across the UK, Continental Europe and the east coast of the USA. Global aviation analysts OAG recently revealed that Cork Airport topped the punctuality league for international airports in Ireland in 2018, with an on-time performance of 80.2%.