Sweden’s iconic Icehotel has released sketches of some of the bizarre designs that will feature in the 2016 version of the famous frozen structure in Swedish Lapland.

A House of Cards and a White Cathedral provide the setting for two of the intriguing suites. Others will include ‘Lapland Waves’, in which the bed appears to float on an ocean of waves of ice, and a room designed as a whirl of passionate thoughts.

More than 40 artists from around the world will be involved in the creation of the hotel, which is constructed from 5,000 tons of ice harvested from the Torne River at Jukkasjärvi and features 55 hotel rooms, a chapel, bar, hall and gallery. 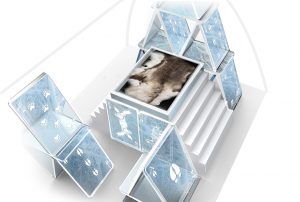 The ‘House of Cards’ design for the new Icehotel

Building the hotel from scratch every year requires a huge amount of work that starts with harvesting ice from the river in March and then storing it until October when the building process starts. A few weeks before opening, artists from every corner of the world gather to create 35 unique suites from ice and snow.

This year the Icehotel will also have a sister property on the same site, in the form of Icehotel 365, a new permanent ice hotel scheduled to open in mid-November.

The new eco-friendly property has been on the drawing board for a number of years but technological advancements in sustainable energy mean it has only recently become possible to create it.

Jon Malmsten, advisor general at Swedish solar power pioneers Solkompaniet, which is a partner in the project, said: “It’s inspiring and fun to be part of an initiative that takes place well above the Arctic Circle. The midnight sun offers unique conditions for producing electricity using solar power, as it allows us to generate power throughout the night.”

Icehotel founder Yngve Bergqvist said: “Every summer we have international visitors who arrive in Jukkasjärvi and ask us where they can see ICEHOTEL – [now] I look forward to being able to point it out to them!”