The agreement will see EVA Air become West Ham United’s official airline partner, as the club prepares to embark upon its third season in the London Stadium in Stratford.

The partnership will provide multiple branding opportunities for EVA Air and will see the two parties working closely together to develop engaging fan activations and initiatives.

Clay Sun, EVA Air president, said: “EVA Air is a proud supporter of sports and we are delighted to be partnering with West Ham United. For years we have actively supported and sponsored sports such as golf, tennis, badminton and baseball and this cooperation with the Premier League football club further extends this across our route network.

“The quality service EVA Air provides to passengers ensures athletes can get the best possible rest during their flights to international tournaments and achieve their best performances.”

Karren Brady, West Ham United’s vice-chairman said: “I am delighted to welcome EVA Air to the West Ham United family. As the excitement of Premier League football continues to grow rapidly throughout Asia, we are extremely proud to team up with an airline that has established a magnificent reputation for its links between London and the Far East. 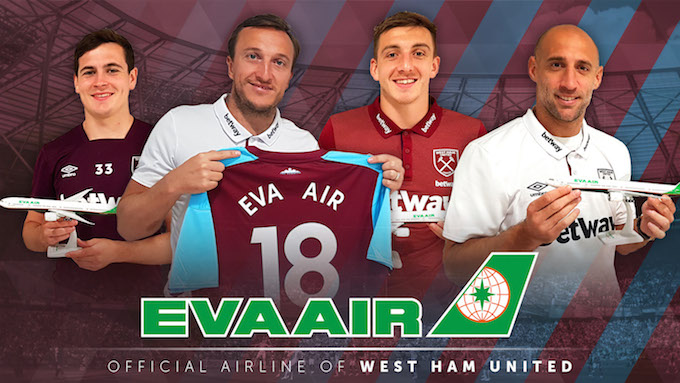 “I am very excited about the benefits that the partnership can bring as we continue to grow and develop our corporate identity on a global scale.”

EVA Air offers daily flights from London to Bangkok and onwards to Taipei. It makes complete sense for the airline to sponsor a London-based Premier League club. West Ham United’s home is the London Stadium, which gained international acclaim during the 2012 Olympics.

Located in the Queen Elizabeth Olympic Park, London Stadium is easily accessed by all modes of public transport and the area has benefitted from amazing redevelopment over the years, which has made it an ideal new home for the club as well as a perfect choice for EVA Air to promote their brand.