The Anfi Group has shown its true colours – as well as passion for the Spanish football team – to celebrate the start of the Euro 2016 tournament in France. 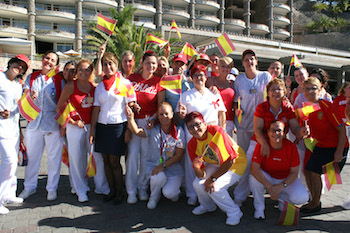 A crowd of over 300 workers from all departments at the Gran Canaria-based company congregated in the Anfi plaza for a family photo opportunity, during which they all dressed in the red of the national team – much to the amusement of guests and holidaymakers in the area.

Housekeepers at the RCI-affiliated resort properties were the loudest and most animated among the various departments represented, which including Customer Services, Accounts and Marketing, chanting songs in support Spain and David Silva, the company’s ambassador and a member of the national team. Silva’s mother was an Anfi worker just a few years ago, before her son became a football star.

The highlight came when the complex’s sound system played the official Euro 2016 song, during which the Anfi employees danced, sang and even did a Mexican wave, encouraging everyone else to join in!