One of the luxurious rooms at Cameron House

Cameron House, a five-star resort set on the banks of Loch Lomond, has launched a new concierge apprenticeship scheme, the first of its kind in Scotland.

The new apprenticeship will run over the course of three years and will educate the selected trainee in the day-to-day supervision of the five-star concierge department, as well as grant access to a range of operational areas throughout the hotel. From organising specialised itineraries and making travel arrangements to fulfilling guests’ requests, the new apprentice will learn the ins and outs of the luxury hospitality industry.

The apprentice will join an existing team of 12 and will be mentored by award-winning concierge, Alan Grimes, who has been in the industry for 30 years and has held the role of Head Concierge at Cameron House Hotel for the past eight. With an impressive career behind him, Grimes is the only concierge to have been awarded both Concierge of the Year Award and the Service through Friendship Award at the Morris Golden Keys Concierge Awards, the Oscars of the concierge industry. Alan is also the founding chairman of the Scottish region of The Society of the Golden Keys, which he initiated in 2009. 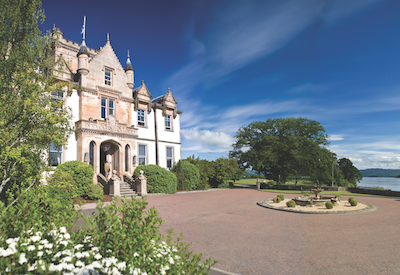 “This new initiative is testament to our commitment to retaining an exceptional level of customer service that is both personable and approachable,” explained Grimes. “We welcome guests here for an experience, not just a stay, and the concierge role plays a key part in that. After 30 years in the industry I want to be able to give back and the apprenticeship scheme gives me the chance to do that.”

Andy Roger, resort director at Cameron House said: “This is our next step in leading the way in luxury hospitality recruitment and development in Scotland. At Cameron House we feel that the concierge apprenticeship scheme not only shows our dedication to the quality of service we provide to our guests, but also our investment in the people who make Cameron House the resort it is today.”

Cameron House recently celebrated 470 years of dedicated service at their Long Service Awards, with 40 employees being recognised for 5, 10, 15, 20 and 25 years’ of service at the resort.

Further to Cameron House’s commitment to recruiting and developing a new generation of concierges, the resort is to host Colin Toomey, international president of The Golden Keys for the first time since the UK joined the society in 1952. The three-day visit to Cameron House in October will see the best of Scottish hospitality being showcased to Toomey and his executive committee, before attending the Morris Golden Keys Concierge Awards in London.

Applications by CV should be sent to hr@cameronhouse.co.uk