Quality and location are more important than price point to the average buyer of timeshare, according to a study carried out by Interval International.

The exchange company’s president, David Gilbert, shared a set of statistics with RDO7 delegates that gave some valuable insight into who the timeshare purchasers are, as well as what and where they want to buy.

“Our members told us that the quality of the resort was the primary purchasing factor for them,” he said. “Quality was the number one factor across all markets, not price or maintenance fees, with high-quality resorts selling the most. Mexico is doing an extraordinary job, having the highest concentration of quality product and better closing rates than any other region.” 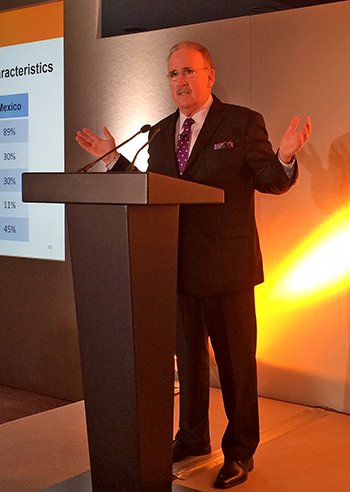 Location was rated second in the factors driving the purchase decision. Interval’s member survey revealed that weeks’ owners formed the largest segment of its member base, although Gilbert saw points becoming the majority product as the business moved forward. Of its week-owning member respondents, they were split:

In emphasising the importance of bringing ‘new blood’ into the purchaser pipeline, Gilbert stressed the need to establish a viable resale market. He noted a growing trend for buyers to buy through management companies and for “developers to buy up management companies so they can access the buyers directly”.

Everyone in the industry knows that in terms of households with a qualified income worldwide, the potential for further penetration is massive. Interestingly, Gilbert revealed that there is a healthy appetite among existing timeshare owners for more of the same – of the respondents to the Interval member survey:

As to the types of holiday that are attracting buyers, the survey statistics did not surprise. A resounding 82% of Europeans bought at beach locations, while 28% were looking to the tropical island paradise. Mountain holidays attracted 20% of buyers; the lakes 13%, with urban holiday destinations on the up with a 22% survey preference rating. “The urban markets and product are very much under-served in our industry,” said Gilbert.

The survey findings around resort amenities were largely predictable, calling out the importance of social media on our holidays, with 85% saying wifi was an on-resort ‘must have’; 83% of respondents wanted a swimming pool; 63% felt it was important to have an on-resort bar and restaurant, while 47% were looking to relax in a spa.

Timeshare has always been distinguished from hotel accommodation and many other holiday types by its spacious and generous living areas, offering real home from home qualities. The survey results validated this, with 44% of respondents preferring to buy and stay in a two-bedroom unit. A one-bedroom unit was OK with a 34% vote, while 13% opted for the studio apartment, 8% for a three-bedroom unit and 1% for the four-bedroom accommodation.

Gilbert commented: “How to get your buyers motivated – larger units. ‘Togethering’ is a phrase you hear today which means people want to travel in larger groups and the interest in larger units will grow, year-on-year.”

As many as 49% of respondents called out shopping as a preferred activity while on holiday, which some resorts had capitalised on by introducing shopping incentive schemes, as Gilbert explained: “Giving $150 pre-paid shopping cards to guests has worked well with some developers.”

Other holiday activities rated by respondents were:

All-inclusive holiday packages are becoming very popular outside the Dominican Republic and Mexico where this model was launched, and the survey findings were revealing. “Above and beyond the value proposition and convenience of these holidays, what is driving these numbers is safety,” said Gilbert. “It is anecdotal, but my feeling is that there is a perceived value in that safety factor that comes with the all-inclusive holiday.”

Demand for all-inclusive holidays in the regions:

“Cruise as a premium incentive is also a great product,” said Gilbert. “49% of our European member respondents had taken a cruise; 54% from the US, 66% Mexicans and 47% of respondents from Asia Pacific.”