Taking ownership, seizing opportunity and taking charge of the game was the focus of this year’s thought-provoking, collaborative and captivating RDO7 conference, which posed the questions ‘If not now, then when? If not you, then who? If not this, then what?’

Approximately 160 delegates gathered at the Pestana Chelsea Bridge Hotel and Spa in London on 20-22 September to discuss the new challenges and opportunities facing the timeshare industry in today’s rapidly changing market.

A consistent theme throughout the Resort Development Organisation (RDO) conference was the millennial purchaser and how timeshare can adapt to meet the needs of a travel-savvy generation. 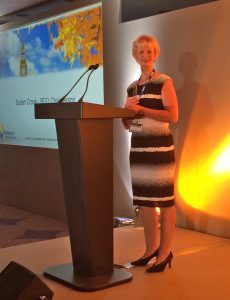 The jam-packed two-day event featured a host of inspiring keynote speakers and panellists, building upon the industry’s shared community spirit to utilise it to create the best possible experience for our owners. RDO7 was the first conference to be held since Susan Crook, vice president of Legal Services and European General Counsel at Diamond Resorts International, was elected as RDO Chairman. In her opening statement, she said: “RDO7 is a fantastic thing – the sessions, the speakers. It’s not just an opportunity to get together to generate new business, but the event’s social side is also quite unique.”

Dream big – take action – play with those who turn up

Three-time Olympic medallist and motivational speaker, Kriss Akabusi, launched RDO7 into full swing by delivering a humorous, uplifting and engaging presentation to delegates. Drawing upon his own experience, Akabusi captured the attention of the room with his astounding energy, as he encouraged the audience to embrace change and challenge their method of thinking with the message, ‘the past is for reference, not for residence’.

The aspirations of travellers are constantly changing, which means the travel industry must be fluid in order to adapt to the market. While many of us feel that we welcome change with open arms and feel positive towards it, this may not be the reality.

Akabusi used a tool to examine the audiences’ positivity by asking them what they read from the sentence, ‘opportunityisnowhere’. Some read the words, ‘opportunity is nowhere’ and others, ‘opportunity is now here’. Although our perception is that we are forward thinkers and feel open to change, in reality we could seize more opportunities in business and think outside of the box.

Akabusi went on to explain that many of us have a 20th century view of the world and we need to focus on thinking and acting in the 21st century, so that we can ensure our business models are relevant to the market today. 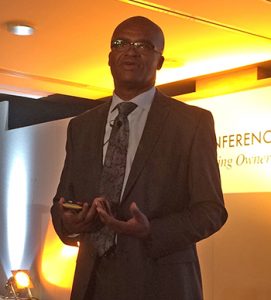 In order for the industry to be innovative, it takes a resilient and determined leader. We all have the ability to be leaders in our own roles, by recognising potential in the market and taking action. Akabusi used the example of his mentor in the British Army, Sergeant Ian McKenzie, who discovered potential in Akabusi’s sporting talent at a young age and encouraged him to pursue a career in athletics.

Sgt McKenzie worked with Akabusi on a training regime and inspired him to take ownership of his environment, working towards a new goal that in turn, established his successful sporting career. By inspiring a coaching mentality in the way that McKenzie did, Akabusi explained that we should nurture potential and ideas to achieve success.

One of the key moments in Akabusi’s career was the 1991 World Championships, anchoring the British 4 x 400m relay team to victory over the Americans in a British record time. Akabusi told an animated story of the World Championships, beginning with his team member, Roger ‘Pretty Boy’ Black, the first white male to compete in the British athletics team. Black’s background, ambition and even fish supper preference differed to the other athletes, but his new way of thinking inspired a new goal for the team, which later helped them to cross the finish line as champions.

Akabusi’s message was loud and clear – learn from the people who come into your business because they will create value in your business. People who dare to be different will help you to raise the bar in your own arena, which is exactly what Black did with his team mates.

In closing, Akabusi maintained his theme of dreaming big, making each day count and seizing the opportunity, inspiring delegates to think outside the box to collaborate and innovate for a 21st Century market.