Vietnam Airlines has signed a Memorandum of Understanding (MOU) with Airbus for 10 more A350-900 aircraft.

The MOU was signed in Hanoi by Duong Tri Thanh, the airline’s president and CEO, and Fabrice Brégier, president and CEO of Airbus, and took place during the state visit to Vietnam of French president François Hollande. It was also witnessed by Tran Dai Quang, president of the Socialist Republic of Vietnam.

Duong Tri Thanh said: “The intention to acquire these additional aircraft reflects our excellent experience with the A350 since it entered service with Vietnam Airlines last year.

“With its very long range capability, economic fuel consumption and spacious cabin, the A350 is the ideal aircraft for our proposed intercontinental routes to Europe and the US. The start of non-stop transpacific services with the A350 is yet another example of the commitment we have at Vietnam Airlines to strengthen our position as one of the world’s leading international carriers.” 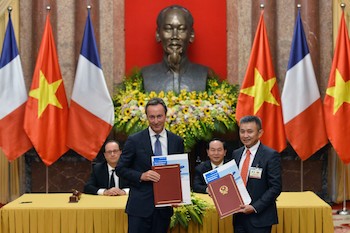 Brégier said: “Today’s agreement further consolidates the A350’s position as the new long haul leader in the mid-size widebody category. “The A350 XWB has quite simply set new standards in its class, combining unbeatable operating economics with the highest levels of passenger comfort. We look forward to working closely with Vietnam Airlines as it continues to develop its long haul network and strengthens its position in the premium market.”

Last year, Vietnam Airlines became the first airline in East Asia and the second in the world to operate the A350-900 XWB. The carrier already has four aircraft in service, with another 10 on firm order, and if the MOU becomes reality, the additional 10 aircraft will enable it to operate non-stop to the US, carrying 305 passengers in a three-class premium layout.

Vietnam Airlines operates the A350-900 XWB on international routes to Paris (France), Incheon (Korea), Shanghai (China) and on domestic routes between Hanoi and Ho Chi Minh City. The new generation aircraft was one of the key factors in helping confirm Vietnam Airlines’ four-star status, and it will play a crucial role in the airline’s planned five-star service upgrade programme in the near future.

In addition, low-cost carrier Jetstar Pacific, a joint venture between Vietnam Airlines and Australia’s Qantas Airways, officially signed a contract with Airbus to buy 10 new-generation Airbus A320ceo aircraft. The planes are due to be delivered in 2017 and will help Jetstar Pacific expand its domestic and international flight network.