Speaking at the Panorama Mega Conference in Jakarta, Gloria Guevara, president and CEO of WTTC said: “Travel & Tourism is an important contributor to Indonesia’s economy, accounting for over six per cent of GDP. In addition, with foreign visitor spend contributing 220 trillion rupiah to the economy, Travel & Tourism accounted for over 55 per cent of Indonesia’s service sector exports.

“I congratulate the government of President Widodo, in particular Minister of Tourism Arief Yahya, on their prioritisation of and commitment to our industry. Thanks to their support for the Travel & Tourism sector, 2.4 million new jobs will be created.” 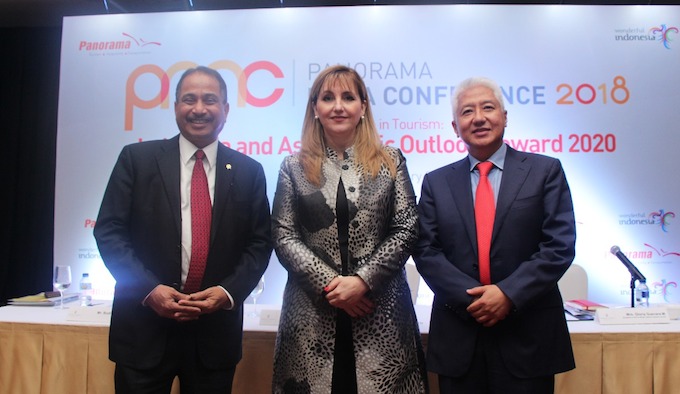 Gloria Guevara of WTTC with Arief Yahya, Indonesia's Minister of Tourism (left) and Budi Tirtawisata, CEO of Panorama Group, at the Panorama Mega Conference in Jakarta

President Widodo has set an ambitious target to attract 20 million visitors in 2019, nearly double that of 2016. He also called for $20 billion in investment in the sector to support this rapid growth. In 2016 Indonesia granted visa free access to nationals of 169 countries, opening up the country to more foreign visitors.

“Indonesia is a prime example of a government which is taking the right approach to tourism development with strategic investment to support sustainable growth and policies which facilitate travel,” added Guevara.

“There is work still to be done, and partnership between the public-sector authorities and private sector enterprises is vital for the ambitious target. WTTC is delighted to support Indonesia’s travel sector in this endeavour.”

Prior to the conference, Guevara held a private meeting with Minister Yahya to discuss opportunities and priorities for Indonesia’s Travel & Tourism sector. She also commended the Minister on the government’s handling of the recent volcanic eruptions from Mount Agung in Bali.

Pemuteran Bay Coral Protection Foundation in Bali has been shortlisted for the WTTC Tourism for Tomorrow Innovation Award, which will be presented at the upcoming 18th WTTC Global Summit in Buenos Aires, Argentina on 18-19 April 2018.