Taiwan welcomed its 10 millionth international tourist arrival at the end of December, pushing the destination to new highs in terms of visitor numbers.

Han Seon Geun from Busan, Korea, landed at Taipei’s Taoyuan International Airport and was greeted by a welcome committee led by Chou Yung-Hui, director general of the Taiwan Tourism Bureau. She was presented with an array of gifts including airline tickets and hotel vouchers. 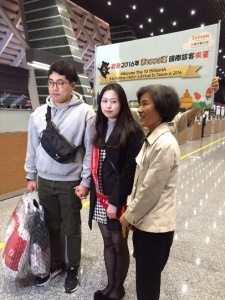 The happy traveller was on her first visit to Taiwan and said she had come to spend her honeymoon on the island with her new husband – who she had married earlier the same day.

The milestone arrival suggests Taiwan’s strengthened promotion of tourist markets in north-east Asia and the target countries of its New Southbound Policy is starting to bear fruit.

The Tourism Bureau said its international promotional efforts in Japan, Korea, and south-east Asia have shown the most significant results, especially among such key groups as study travellers, incentive travellers and Muslim travellers, which have all seen considerable increases.

In terms of visitor source structure, the mainland Chinese who made up more than 40 per cent of all arrivals in 2015, began plummeting in June and by October had dropped 44.3 per cent.

This market is set to drop to an estimated 30 per cent of the year’s as political tensions between the two countries remain.

Last year was also a good year for UK arrivals, with the number of British people visiting Taiwan exceeding 2015. British arrivals remain Taiwan’s largest outbound market in Europe and a 10 per cent growth in visitors from the UK is forecast for this year.