EVA Air, Taiwan’s leading independent airline, has been rated as one of the world’s top three Most Loved Airlines by global airline quality ratings website SKYTRAX.

This latest seal of approval comes just a couple of months after the announcement that EVA Air had received 5-Star status from the international air transport standards and quality rating organisation and further cements the airline’s status as one of the best in the world.

SKYTRAX invited travellers to rate overall flight experiences on more than 420 carriers worldwide and ranked the Most Loved Airlines on an aggregate of those customer scores. All 80 of the airlines on SKYTRAX’s Most Loved list received a minimum of 225 reviews and traveller scores and using a scale of 1 to 10, travellers rated their flights in eight categories, including seat comfort, onboard services, food and beverage, inflight entertainment, onboard wi-fi, airport services and value for money. EVA Air scored a satisfaction rating of 81 per cent and eight of the world’s top ten most-loved airlines are Asia-based carriers. 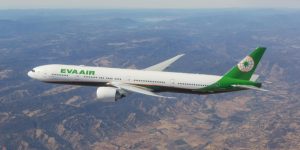 Quality service with emphasis on passenger comfort remains a priority for EVA Air, both in terms of frontline delivery on the ground and in the air. SKYTRAX elevated EVA to the elite rankings of the world’s 5-Star Airlines earlier this summer, having started to rate the Taiwanese carrier in 2008, immediately awarding it 4 stars and recognising the airline’s high product standards and staff services across different cabin classes inflight and at the airline’s main hub, Taoyuan International Airport outside of Taipei, Taiwan.

SKYTRAX also ranked EVA number one for ‘Best Airline Cabin Cleanliness’ in 2015, Best Trans-Pacific Airline and Best Business Class Comforts and Amenities for 2016 and one of the World’s Top 10 Best Airlines for 2015 and 2016.

AirlineRatings.com recognised EVA as a carrier of choice among the ‘World’s Top 10 Airlines’ for 2015 and 2016 and rated its Elite and Economy Classes in the world’s top 10 “Best for Economy Plus and Economy Class Travel for 2015.