With the world average growth rate at four per cent per year, and Asia Pacific at 5.8 per cent, these cities are significantly outpacing both the regional and global average.

Asia Pacific also includes some of the world’s largest Travel & Tourism cities. Shanghai, with an annual tourism GDP contribution of US$30 billion is the largest in the world, followed by Beijing (US$29 billion).

Tokyo (US$20 billion) is ranked sixth in the world. Shanghai and Beijing together account for 21% of China’s Travel & Tourism economic impact (GDP), whereas Tokyo alone accounts for 18% of Japan’s total. The dominance of the Chinese market is clear, both in terms of future growth and overall size and as a main source market for destinations in the wider Asia Pacific region. 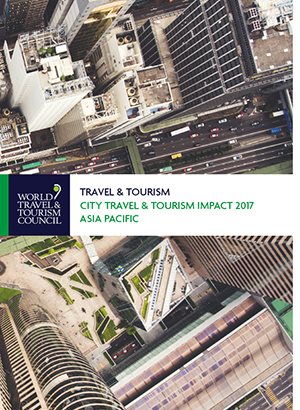 The success of Chinese cities is largely driven by domestic business (as high as 94.5% of spend in Chongqing is domestic), and the Chinese outbound market is key for neighbouring cities such as Tokyo (24% of spend is Chinese, the largest market) and Bangkok (38%).

Gloria Guevara, the WTTC’s president & CEO, said “The power of Asian cities when it comes to driving the Travel & Tourism sector is clear to see in this new data. However, not only do these cities contribute significantly to their country’s tourism sector, tourism is an important generator of economic growth and jobs within the cities themselves.

“With this level of forecast growth, the importance of investment in long term planning, infrastructure and sustainable public policies cannot be underestimated. It is vital that city authorities understand the economic impact of Travel & Tourism, GDP and employment contribution, and not just visitor arrivals, as they seek to develop new products and opportunities to increase traveller spend and sustainable growth. WTTC has invested in this new research and data to support them in this ambition.”

Other highlights from the report include: