Located in Dubai’s sought-after Business Bay district, the striking 40-storey property commands a prime position on Burj Khalifa Boulevard overlooking the world’s tallest building, and is expected to open in 2017.

Major infrastructure projects and attractions are within a stone’s throw of the 299-room hotel apartment including Old Town Island, the Opera District in Downtown, The Dubai Mall and the Dubai Canal Project, while the city’s financial and commercial hubs are on its doorstep too. 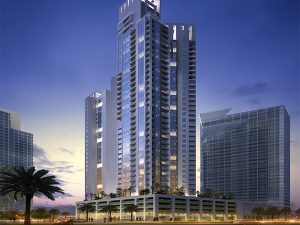 The hotel will feature well-appointed and spacious studios as well as one-, two- and three-bedroom apartments. Its stand-out amenities include a three-tiered podium area with six meeting spaces; a destination spa, gym, beauty clinic and swimming pool; a children’s area with pool; an all-day-dining outlet, café and lobby lounge; and a business centre.

MHR already operates six hotels in Dubai and has two more properties planned for the city – the 244-key Mövenpick Hotel Apartments Downtown Dubai opening in 2017 and the Mövenpick Hotel Dubai Media City in 2018.